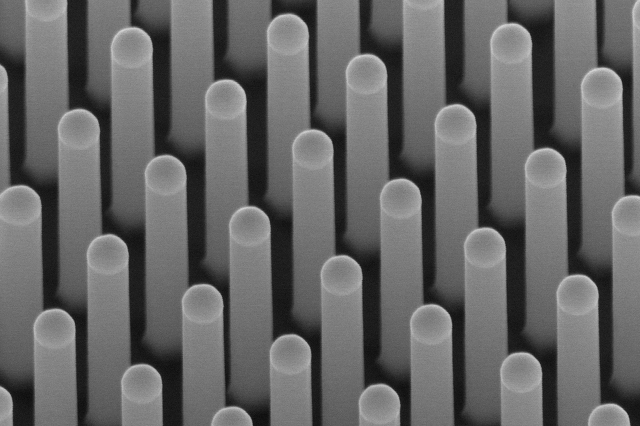 Electron micrograph of indium phosphide (InP) nanowires. Each is 180 nanometers in diameter; this diameter allows them to capture more light, making them effective in a photovoltaic solar cell.
Wallentin et al.

In the continuing quest to create solar cells, researchers seek new materials, use clever techniques, and look for novel physical phenomena to extract the maximum electricity out of sunlight for the lowest cost. One method of extracting more power at a lower cost relies on creating arrays of nanowires that stand vertically on inexpensive substrates. In contrast to the material in ordinary solar cells, nanowires use less material, can potentially be built with less costly materials, and in principle trap more light thanks to the geometry of the arrays. However, most nanowire solar cells are currently outperformed by their conventional counterparts.

A new effort used indium phosphide (InP) nanowires with diameters smaller than the wavelength of the light they were trapping. That trick enabled Jesper Wallentin and colleagues to reach comparable efficiencies and slightly higher voltage than a conventional InP solar cell. While the wires only covered 12 percent of the surface area, they exploited a principle known as resonant trapping to extract over half as much current as a full planar cell of InP. This approach could lead to even greater efficiency at lower cost for solar cells.

Many candidates for the next generation of photovoltaic (PV) solar cells are being investigated. Research in this area has two goals that don’t always overlap: maximizing the efficiency of converting sunlight into electric current, and reducing cost per unit of electricity. The advantage of nanowire-based cells lies in using a lot less material, since the entire surface need not be covered in PV material. Additionally, the wires themselves can be fabricated from relatively inexpensive semiconductor materials.