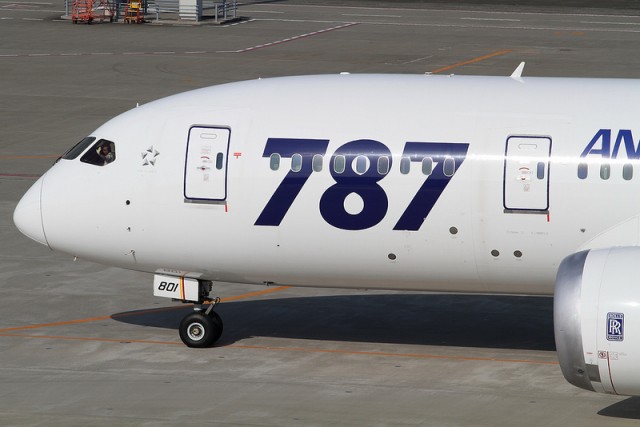 A battery incident on an ANA 787 Dreamliner was the last straw for the FAA.
Kentaro Iemoto

The Boeing 787 Dreamliner was supposed to be the company’s bold entry into the future of air travelâ€”an environmentally friendly, fuel-efficient worldÂ traveler. Using 20 percent less fuel than Boeing’s similarly sized 767, it was the most heavily pre-ordered widebody aircraft ever.

But now, the entire fleet of 787s has been grounded because of a series of mishaps involving the plane’s batteries. On January 7, a Japan Airlines 787 just in from Tokyo caught fire at Boston’s Logan International Airport when the batteries in the aircraft’s auxiliary power unit ignited; eight days later, a battery scare forced an All Nippon Airways 787 flying from Yamaguchi, Japan to make an emergency landing and evacuate.

The batteries at the heart of the problem, manufactured by the Japanese firm GS Yuasa Corporation, are essentially giant versions of the lithium-ion batteries used in cell phones and laptops. Like those batteries, the Dreamliner’s use a lithium-cobalt oxide cathode, which is “an inherently unsafe cathode,” said Mark Allen, assistant professor of chemistry and biochemistry at the University of Maryland, Baltimore County. And in the larger form used by Boeing, they pose an even larger risk. When overcharged or damaged, they can become essentially a firebomb inside the airplaneâ€”one that burns without air and can’t be put out by usual aircraft fire suppression systems.

When scientists scoured lists of the city’s community gardens, they discovered they didn’t tell the whole story of where food was being grown. Satellite images instead show the city’s food-producing gardens tucked away in backyards, on roofs and thriving in vacant lots.

The Raspberry Pi Foundation announced yesterday that one of their two manufacturers has officially built their 500,000th Raspberry Pi unit, and the other is expected to be nearing the same amount Â¿ an impressive pace for the $35 bare-board Linux computer that was released in February of 2012. In a recent report, it looks like Appleâ€™s iPhone 5 is losing its grip on the everyday consumer. According to Consumer Reports, the iPhone 5 is now listed as the lowest rated top 3 smartphone on each carrier, minus T-Mobile who havenâ€™t had the device on their network. Topping the lists are the Samsung Galaxy S3 for T-Mobile, the LG Optimus G for AT&T and Sprint, and the RAZR HDâ€™s for Verizon. Crazy enough, the iPhone didnâ€™t even make it onto Big Redâ€™s list, which is actually quite surprising.Â

How Consumer Reports handle their rating of said devices isÂ unknownÂ to me, but it is great to see Android becoming the forerunner in smartphone operating systems. Android devices have certainly come a very long way in terms of consumer praise and advancements in both software and hardware since the days of iPhone supremacy.

Guess itâ€™s time to start awaiting the iPhone 5S and the magical features it will wield.

Though most of the important launch details of Tegra 4 were leaked weeks in advance, NVIDIA did manage to keep their final major CES announcement under wraps to the very end. Wrapping up their CES presentation, NVIDIA has announced that they will be entering into the handheld console business with their own Tegra 4 powered console, dubbed Project Shield. While weâ€™re still waiting on NVIDIA for further details, what we do know so far is that Project Shield is essentially a handheld console built around NVIDIAâ€™s recently announced Tegra 4 SoC. Details on Tegra 4 are still sparse since NVIDIA has not announced the individual SKUs, but we do know that the top-end configuration contains 5 ARM A15 CPU cores in a 4+1 configuration similar to Tegra 3, and on the GPU side is backed with a hereto unknown GPU architecture composed of 72 GPU cores.

All of this is built into an oversized game controller that is configured very similarly to the PS3 DualShock 3 controller, possessing 2 concave thumbsticks, a 360-like D-pad , 4 face buttons, and 4 shoulder triggers/buttons (2 on each side). Topping off the console is a 5â€ 720p multitouch display (no word yet on whether itâ€™s OLED or LCD) that flips over the console in a clamshell fashion. Meanwhile powering the device will be 38 watt-hours of Lithium-Ion battery cells; this is roughly between the Nexus 10 (33.75Wh) and the iPad 3/4 (42.5Wh), meaning Shield will have what amounts to a tablet-capacity battery. On the software side of things Project Shield is running what NVIDIA is calling â€œpure Androidâ€, which in this case is presumably a reference to them not doing any skinning/customizations, ala MotoBlur, TouchWiz, and other OEM customizations. This means that Project Shield is capable of running standard applications (something NVIDIA made sure to demo) and is otherwise usable as a standard Android device. Meanwhile NVIDIAâ€™s Shield application is where gaming takes place, effectively launching users into NVIDIAâ€™s own sandbox, where gamers can pick up Shield-optimized games from the TegraZone store and then run them on the device. Finally, on the software side of things NVIDIA is also going to be offering a level of integration between Project Shield and their GeForce products by offering their own Splashtop-like remote gaming experience. By leveraging the Video Codec Engine video encoder inside their recent GTX 600 video cards, Project Shield devices will be able to connect to PCs to do remote gaming. To show this off NVIDIA showed a GTX 680 equipped PC running Steam in Big Picture mode being streamed to Shield, the logical pairing to Project Shieldâ€™s dual nature as a portable computing device and a controller. Shield will of course also be able to function as an endpoint for any cloud game service providers using NVIDIA’s GeForce GRID technology. Edit: At this point NVIDIA has not announced hard pricing or availability, but we have been given guidance that “Shield will launch in Q2 at a price competitive with other mobile gaming systems and tablets.” Since the critical component here is Tegra 4, the Q2 projection for Project Shieldâ€™s availability most likely hinges on when exactly T4 will become available this year. 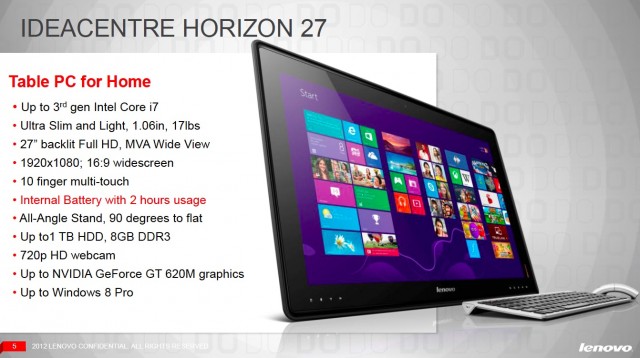 Lenovo is just one of the many PC makers bringing new designs to CES this week. Many of these will simply be refreshed or refined versions of the first round of Windows 8 computersâ€”either convertible laptops or more traditional desktops and laptops with integrated touchscreensâ€”but a few particularly interesting designs may yet rise above that fray.

One of these PCs is Lenovo’s IdeaCentre Horizon 27, a 27-inch all-in-one desktop PC with an integrated battery and 1080p ten-point touchscreen. Lenovo is marketing the device as a “table PC.” Sure, a kickstand can be unfolded to allow the computer to sit on a desk as would any all-in-one. But this PC can also be laid flat on a table for use by multiple people, or mounted on the pictured roller table for use while standing. (We’ve previously statedÂ a touchscreen all-in-one makes the most sense ergonomically while positioned at about waist height on a standing person.) 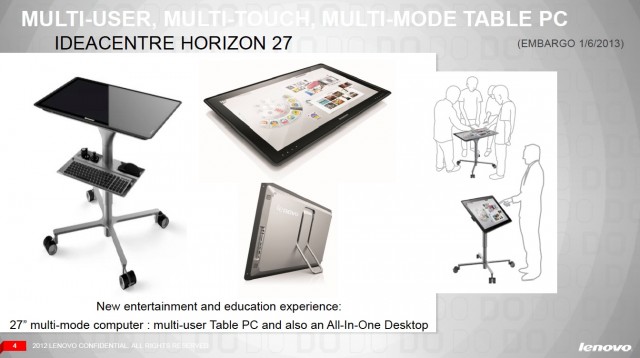 Enlarge / A roller table will change the Horizon into a standing workstation, when needed.
Lenovo

In concept the Horizon is quite similar to Sony’s Tap 20, a smaller all-in-one that also included an integrated battery and foldable kickstand allowing it to be laid flat on a table. The Horizon’s larger size will mean more people can gather around it at once (and the roller table may make it more useful for people who prefer to stand at their desks), but the two machines are definitely cut from the same cloth. Like the Tap 20, multiplayer touch-enabled games figure heavily into Lenovo’s promotional material for the device.