Making the rounds today is an interesting story, given that it could have greatly affected the way we think about our smartphones and the competitors in the smartphone race. In 2009, before the Siri startup was purchased by Â Apple, Verizon made their own bid in an effort to have the software installed on every DROID-branded device they sold. Verizon was so far into the deal that even commercials were filmed to tout DROIDâ€™s newest halo feature.Â

Sometime soon after this, Steve Jobs had a meeting with the co-founder of Siri and shortly thereafter, Siri was Appleâ€™s. Siri now ships on every new iPhone, still being marketed as one of the main selling features. Plus, she can even tell you jokes after failing to do simple web searches. Itâ€™s a win-win.

Now, I wanted to go back to how I said it would have changed the way we think about the smartphone race. ForÂ example,Â if Siri was in fact bought by Verizon instead and installed on all of their Android devices, we as Android users would be the ones defending this software. Down the road, and say Apple created Apple Now, we would be the frustrated Siri users who would dream of something like that coming our way. If you ask me, we all dodged a bullet. Shout out to Steve Jobs for sparing all of us. 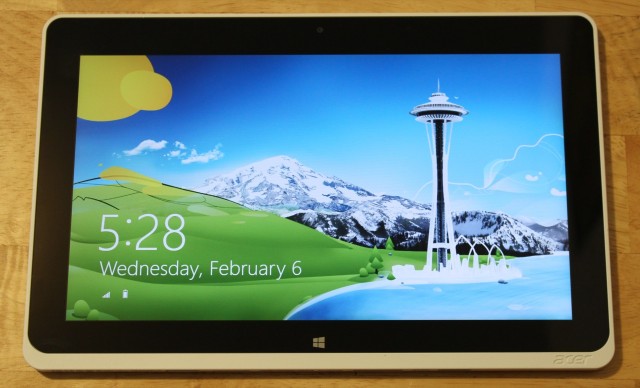 The W510’s 10.1-inch 1366×768 display, surrounded by a black bezel. A capacitive Windows button is located below the screen.
Andrew Cunningham

When Microsoft announced Windows on ARM way back in early 2011, it definitely made some senseâ€”ARM-based processors were, then, the best way to build a tablet that would have the size, weight, and battery life it needed to succeed against the iPad and the rising tide of Android tablets.

Fast forward to late 2012, and we finally know all there is to know about the operating system that came to be known as Windows RT. It looks like Windows 8, it feels like Windows 8, but in one especially crucial aspect it is not Windows 8: despite including a desktop environment, a port of the desktop version of Microsoft Office, and the common suite of first-party desktop applications you might expect in a Windows PC, Microsoft rendered it completely incapable of running desktop applications by third parties. Thus, one of Windows 8’s biggest theoretical selling pointsâ€”the ability to get a good tablet experience and a good laptop experience from the same deviceâ€”was almost completely excised from Windows RT.

Something else happened in that two-year gap, too: Intel started getting serious about fitting its processors into tablets. Intel processors bring the full Windows 8 experience (and all of your legacy apps) to a tablet, but tablets based on Ivy Bridge processors have their own drawbacks, namely size; heat; and reduced battery life compared to their ARM-based counterparts (see both our Acer Iconia W700 and Microsoft Surface Pro reviews for concrete evidence). 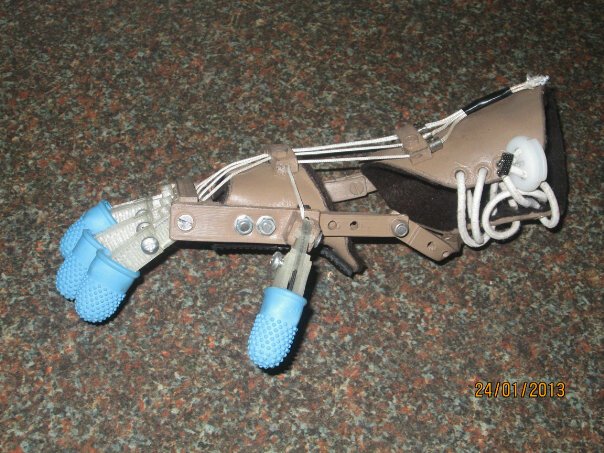 Liam’s Robohand, the product of a collaboration between Ivan Owen in Bellingham, Washington and Richard Van As in South Africaâ€”and produced on a MakerBot 3D printer.

Not too long ago, Liam had no fingers on his right hand. The South African five-year old was born with Amniotic Band Syndrome, which causes amputation of digits before birth. But since November, Liam has been using a series of prosthetic hands designed by two men living on opposite sides of the planet, using open source software and 3D-printing technology.

Now, those two menâ€”Ivan Owen in Bellingham, Washington and Richard Van As in South Africaâ€”have published the design for Robohand, the mechanical hand prosthesis, on MakerBot’s Thingiverse site as a digital file that can be used to produce its parts in a 3D printer. They’ve intentionally made the design public domain in the hopes that others around the world who don’t have access to expensive commercial prosthetics (which can cost tens of thousands of dollars) can benefit from it.

Liam, on his third day with his completed Robohand.

The project began with a mechanical hand Owen made for a science fiction convention in 2011. He works for a school supply business during the day, but he also works from home creating special effects. When a video of Owen demonstrating the oversized hand went viral, it got the attention of Van As, who had lost most of four fingers on his right hand in a woodworking accident. Van As had been told that prosthetic fingers, such as the X-Finger, would cost him at least $10,000 per finger replaced, so he set about in his workshop trying to design his own. 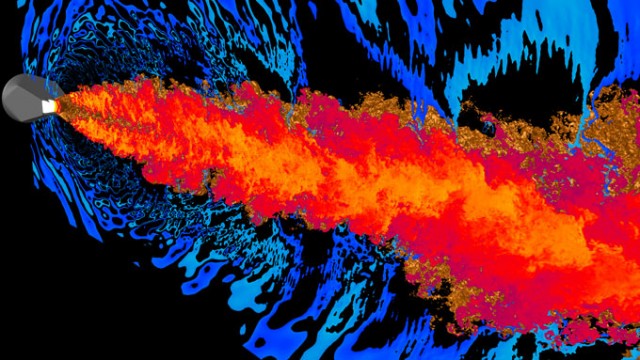 Jet noise simulation. An engine nozzle is on the left in gray; exhaust temperatures are in red and orange; sound is represented in blue and cyan.
Stanford University

At the Lawrence Livermore National Laboratory in California, a supercomputer named “Sequoia” puts nearly every other computer on the planet to shame. With 1.6 million processor cores (16 per CPU) across 96 racks, Sequoia can perform 16 thousand trillion calculations per second, or 16.32 petaflops.

Who would need such horsepower? The IBM Blue Gene/Q-based system was built for the Department of Energy for simulations designed to extend the lifespan of nuclear weapons. But for a limited time, the machine is being made available to outside researchers to perform all sorts of tests, a few hours at a time.

One of the first to take advantage of this opportunity was Stanford University’sÂ Center for Turbulence Researchâ€”and it wasn’t hesitant about seeing what this machine is really capable of. For three hours on Tuesday of last week, researchers from the center remotely logged in to Sequoia to run a computational fluid dynamics (CFD) simulation on a million cores at onceâ€”1,048,576 cores, to be exact.

An edict from the Library of Congress is about to make phone unlocking illegal for the first time in 6 years. The decision, issued in October, is part of a triennial process whereby the Librarian of Congress hands out exemptions from the Digital Millennium Copyright Act.

The two previous batches of regulations, issued in 2006 and 2010, respectively, granted users permission to unlock their phones in order to switch wireless carriers. But in the wake of a 2010 decision holding that software is licensed rather than sold, the Library reversed itself and declared phone unlocking illegal once again. The Librarian was also influenced by claims that there are more unlocked phones on the market than there were three years ago.

The new ruling comes with a grandfather clause. It will continue to be legal to unlock phones purchased before Saturday, January 26. But if you unlock a phone purchased after that date you could be liable under the Digital Millennium Copyright Act, which prohibits the “circumvention” of copy protection schemes. 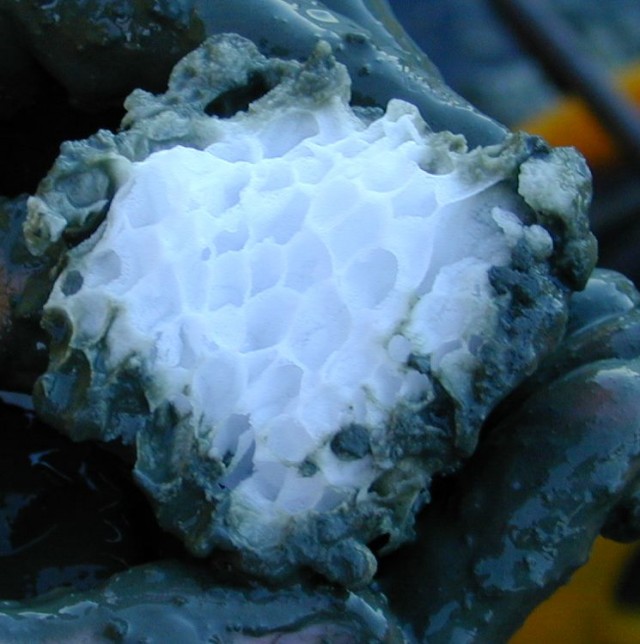 This sample of methane hydrate, which resembles ice, was retrieved by a German research vessel of the coast of Oregon.
Wusel007

The University of California, IrvineÂ has been grantedÂ $1 million to develop a unique laboratory for the research of clean energy obtained from methane hydrates, an as-yet untapped source of methane gas that exists in huge quantities in some ocean-floor environments.

Methane hydrates are clathrate compounds, where the methane molecules are trapped in a lattice of water iceâ€”hence their alternate names, methane clathrate and methane ice. They occur where methane and water are present at favorable combinations of low temperatures and high pressure. These conditions restrict clathrates to undersea locations at polar latitudes and along continental shelves, where they are distributed within the sedimentary bed.

Such environments are plentiful, of course, and so it’s unsurprising that methane hydrate is thought to be abundant on planet Earth. However, as our understanding of methane hydrate formation has grown, our best guess as to the extent of the reserves has become smaller. Currently, the most conservative estimate is that there are between 500 and 2,500 gigatonnes of carbon in submarine gas hydrate deposits, the majority of which are in the form of methane.

We’re not at the point where we can cool chips with lasers yet, but we may be a step closer.
MIT

The process of cooling materials to cryogenic temperatures is often expensive and messy. One successful method is laser cooling, where photons interact with the atoms in some way to dampen their motion. While laser cooling of gases has been standard procedure for many years, solids are another issue entirely. Success has only come with a few specially prepared materials.

Having a laser annihilate something isn’t usually associated with chilling anything down. But a new experiment reduced the temperature of a semiconductor by about 40Â°C using a laser. Jun Zhang, Dehui Li, Renjie Chen, and Qihua Xiong exploited a particular type of electronic excitation: when the photons interacted with this excitation, they canceled it out, damping the thermal fluctuations in the material.

Laser cooling of gases transfers some of the kinetic energy of the atoms into photons they interact with. Successful laser cooling was achieved in glassesâ€”solids without an ordered, coherent crystal structureâ€”by embedding rare-earth atoms in the matrix. As with gases, the excitation of the rare-earth atoms produced the cooling. However, that method won’t work for every solid.