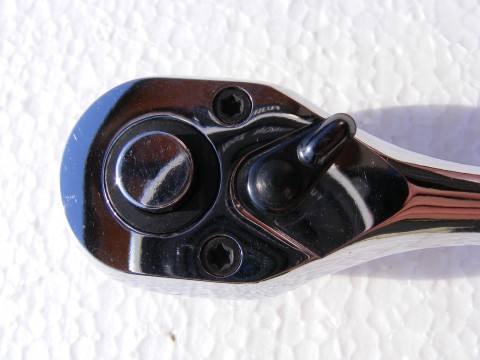 A ratcheting socket wrench happily turns one way, but resists rotation in the opposite direction. A magnetic quantum ratchet allows flow of electrons one way, but not the other.
Emilian Robert Vicol

In a common type of mechanical ratchet, back and forth motion provided by a human arm gets converted to rotating motion that acts to tighten a screw or bolt. The role of the ratchet is to convert a force that changes direction into a torque acting in one direction only. That principle is generalized in many other systems that convert fluctuations (some of which may be random) into usable work. Many types of ratchets exist, in mechanical, quantum, and biological systems.

Researchers have now fabricated a magnetic quantum ratchet out of graphene, a two-dimensional hexagonal lattice of carbon atoms. C. Drexler and colleagues introduced asymmetries in the electronic structure by disrupting graphene’s structure with hydrogen and modifying the substrate on which the carbon sat. When they exposed the modified graphene to an alternating electric current and a strong magnetic field, its electrons preferentially moved in one direction, setting up a directed current. So the modified graphene acted as an AC/DC converter. Although it’s not practically useful, the behavior may tell us more about the rules that govern graphene-like materials.

Under ordinary circumstances, graphene is a symmetrical hexagonal lattice of carbon atoms. When exposed to an alternating electric current, the electrons oscillate, producing no direct current on average. Similarly, imposing a steady magnetic field in the presence of the alternating current alters the electronic properties of the graphene slightly, but doesn’t tend to make the electrons move preferentially in one direction.