Warning: The information below may not be accurate. Iâ€™m publishing it for entertainment purposes only!

According to the source, this comes from a mock calendar diary that was published back in 1997.

An apparent slip of the hand by a Taliban spokesperson has revealed the members of the groupâ€™s mailing list, according to a report Friday from ABC News. The 400 e-mail addresses include many journalists, but also a few members of government as well as â€œacademics and activists.â€

The Taliban regularly sends e-mail blasts with press releases highlighting its latest activities, usually from the e-mail account of spokesperson Qari Yousuf Ahmedi. But this time, the press release Ahmedi intended to send was forwarded from the account of another spokesperson, Zabihullah Mujahid. Ahmedi forwarded the e-mail on to the mailing list, but CCâ€™d all 400 members, rather than BCCâ€™ing them, so the full list of e-mail addresses was laid bare to all who received it.

According to ABC News, the list included â€œa provincial governor, an Afghan legislatorâ€ and an â€œAfghan consultative committee.â€ We can only imagine the chain of reply-alls that followed, but weâ€™re certain itâ€™s the stuff of nightmares.

Last week I commented that Appleâ€™s attempts to take severe liberties when posting an official statement clearing Samsung of violating their patents were a â€œskillful piece of public relations writing.â€ It turns out the judge who ordered the statement to be published strongly disagrees.

Apple was forced to put the statement on its site after losing a court case in which it claimed Samsungâ€™s products such as the Galaxy Tab infringed on the design of the iPad.

Once the appeals process was over and the case finally lost, Apple did so. But rather than just print the statement, it added a few choice extracts from the judgeâ€™s ruling in which he said the Tab wasnâ€™t as cool as the iPad, along with a note that Apple had prevailed in similar cases in other countries, meaning that â€œâ€¦ other courts have recognized that in the course of creating its Galaxy tablet, Samsung willfully copied Appleâ€™s far more popular iPad.â€

Judge Robin Jacob didnâ€™t see the funny side and â€” contrary to how I interpreted it last week â€” concluded that the notice didnâ€™t meet the letter of his ruling. He said â€œIâ€™m at a loss that a company such as Apple would do this. That is a plain breach of the order.â€

Jacob and two fellow judges have now ordered that Apple publish the statement that Samsung was found not to have breached the patents â€” and nothing else. Apple must also include a link and notice on their UK homepage, in at least 11 point text, noting that the original statement has been corrected.

Apple asked for 14 days to make these changes. Jacob rejected that request and is quoted as saying â€œI would like to see the head of Apple make an affidavit setting out the technical difficulties which means Apple canâ€™t [immediately] put this on their website. I just canâ€™t believe the instructions [its lawyers] have been given. This is Apple. They cannot put something on their website?â€

Crafty as its handling the original statement was, it does seem fair to say Apple is going to have to admit the game is up now and move on.

Appleâ€™s appeal has been lost, and a public apology is all that is left to do in a U.K. case between the iPad and the Galaxy Tab 10.1. According to the judge, Appleâ€™s apology must appear on their official website and in newspapers while featuring the Arial font with a size of no less than 14pt.

As for when we can expect to see an apology, we still await the details. How about that for comedy?

A comparison of Apple’s iPad clock to the SSB original.

Apple added a Clock app to the iPad in iOS 6, but the company may get into trouble for the visual look of the app’s analog-style clock face. According to Swiss newspaper Tages Anzeiger, Apple’s designers copiedÂ the iconicâ€”and trademarkedâ€”look of the Swiss Federal Railway (Schweizerische Bundesbahnen, or SBB) clocks used in train stations all over Switzerland. And the SBB wants Apple to pay up.

This isn’t the first time Apple has used an iconic design for an iOS app. The original iOS calculator used a design that paid homage to the classic Braun ET44 calculator. Apple SVP of Industrial Design Jonathan Ive is well-known as an unabashed fan of Braun designer Dieter Rams.

However, SBB noted that it has a copyright and trademark on the design of its railway station clocks, which have become an icon of both SBB and Switzerland itself. “We enjoy the fact that the Swiss railway clock is being used by Apple. It once again proves that it’s a real piece of design,” SBB spokesperson Christian Ginsig said. “This act, however, is an unauthorized use [of the clock’s design] by Apple.” 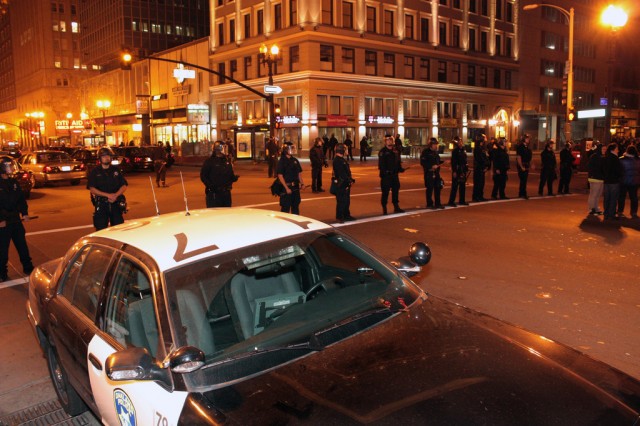 Since its installation in July 2011, the City of Oakland has had massive problems with its radio system.
Timothy Wells

On Tuesday, the San Francisco Chronicle reported that local officials, in collaboration with investigators from the Federal Communications Commission, have now found the culprit to the Oakland Police Departmentâ€™s ongoing public safety radio woes: AT&T.

Last week, FCC and the City of Oakland notified the mobile network that its towers were interfering with the radios, but the problem got significantly worse when a police car found itself within a quarter-mile of a tower. (That is, according to David Cruise, the cityâ€™s newly-hired public safety systems adviser, as reported by the Chronicle).

“If the officer is in an area close to one of their cell sites, essentially the cell site overpowers their radios,” he told the paper.

NASA’s ability to land a gigantic rover on the surface of Mars? Impressive. The fact that it did so for less money than AT&T spent on building cell towers last year? The best evidence yet that we’re putting our faith in the wrong people. MoreÂ Â»